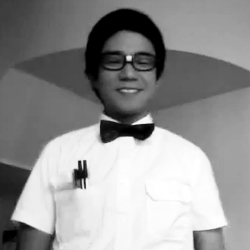 Jim Lee is a kung-fu nerd who likes to make things. For example, he likes to make music, art, games (such as Chicken Nugget), pizza, and more. He has won many awards such as the Pye Memorial Scholarship, SDCCD Technology Innovation Grant, and Westlake High School Battle of the Bands. Jim was born and raised in Cleveland, Ohio. He then moved to San Diego and played in a punk band. Now he lives all over the world, living the life of an international nerd.

Hi! My dogs wanted me to let you know that I’m the greatest guy in the world. They say I’m a genius and I make the best New York style pizza on this side of the Mississippi. Ok friends, talk to you later – Jim